Notice: This thread is very old.
8 years ago

This RFC proposes to split nette/application into 4 packages and reduce their dependencies. 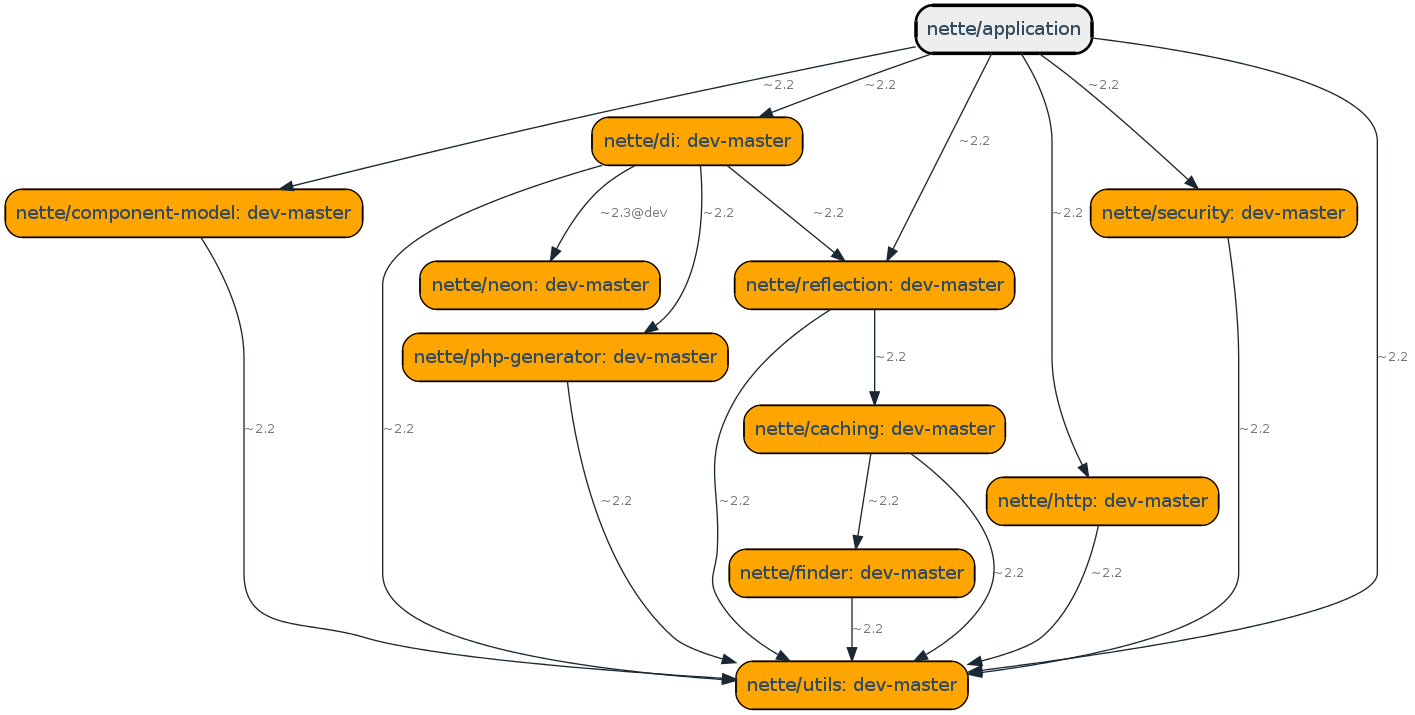 Among the dependencies is nette/di.

Note that the dependency on nette/di will be entirely removed.

Classes in nette/routing package will be moved to new namespace Nette\Routing:

This breaks all packages which depend on nette\application ~2.2 and require anything from UI layer. We can possibly workaround this by creating one more package but I recommend not doing so.

I was thinking about using Presenters & Controls with a different routing library. No support for that?

@enumag you could do that by implementing custom IRoute that will wrap the other routing lib.

No. The IRouter interface is very general, use adapter pattern if necessary.

@JanTvrdík How would you remove a dependency on Nette\DI from tree? The PresenterFactory has it in constructor. Or UI\Presenter::injectPrimary(Nette\DI\Container $context = NULL, ...)…

@Milo Good question! A general rule of DI is that nothing should depend on DI container.

Presenter has already been refactored by @DavidGrudl to have DI\Container as optional dependency only. We may remove the dependency entirely or keep it as optional.

PresenterFactory is a bit tricky. It currently has two responsibilities:

The first responsibility is OK, only the second one causes trouble. What PresenterFactory should receive instead of DI\Container is a list of factories / callbacks (one for each presenter). Building of the list will be responsibility of someone else. In our case it will be most likely a compiler extension. And yes, that would require all presenters to be registered as services. We may probably figure out some way to keep the registration optional. Although I'm not sure whether we really want to make it optional (registering it has multiple advantages).

@JanTvrdík Why not just one callback? (That's how I solve similar cases.)

I've updated the RFC to mention impact on namespaces.

@JanTvrdík Creating presenter instances is the main responsibility of PresenterFactory. Mapping between names and classes is just an internal detail (and part of the creation process).

@HonzaMarek Yes. The problem is that PresenterFactory does not creates the instances itself but delegates the responsibility to DI container. Which is wrong.

Should Application\Request really be part of routing? I think the general router should map between Http/Request and some bag (array?) of parameters. Then there would be some bridge between routing and application that would map these parameters (among them method, presenterName, etc.) to Application\Request.

@JanTvrdík actually, I think we should go even further and not even create instances using DIC (by the createInstance method), but have all presenter registered in DIC and then have them created using the DIC properly.

This is still something I want to do. I once again work on a web application without HTML interface. Therefore I need to have installed the following packages even though they are useless for me.

@DavidGrudl Would you accept this for Nette 2.4 or do we need to wait for 3.0?

I would love to see this RFC going somewhere!

Routing should be moved to new package nette/routing, but it must be independent on Nette\Application\Request, ie. nette/application should depend on nette/routing but not vice versa. Routing can IMHO operate with simple array.

Dependency on nette/reflection exists only for back compatibility, due to $presenter->getReflection()->getMethod(...)->hasAnnotation(...). I'd like to remove it in future, but it is BC break.

Dependency on nette/security will be needed (maybe) due to https://github.com/…ation/pull/4.

Dependency on nette/reflection (…) I'd like to remove it in future, but it is BC break.

As long as users can override getReflection() in BasePresenter it is easy to fix.

I disagree with it being useless, although it is currently not as important.

NPM is bad example. It's problem are not small packages (which result in having a lot of them), but having tons of packages which do pretty much the same. So every time you install some NPM package, you end-up with multiple promise implementations, multiple process abstraction, tons and tons of utils packages and even more packages that I don't even understand why they exist in the first place.

you will have installed less number of packages (for you very rare usecase, but majority will have to install more packages for standard use.

Yes, that is good point. Although I would say that not using Application\UI is not that rare and we should educate people (this RFC is one of many steps) to not use Application\UI (e.g. for API or CLI) more.

I don't care as much about the version number as about the probability that it would be merged if I started working on this.

ad router: only $params are needed. The $presenter can be extracted from $params by nette/application. Everything else is direct copy from Nette\Http\Request. So routing can be really only about Http\Request → params and params → URL.

ad merge: of course I would merge it.

I'd love to have web-application and cli-application. It could be next generation of framework based on simple commands. Just nette way.